Signs are the Secret

For so many of the school projects I work on, the conundrum is how to care for it once it’s installed/built/planted.  Here’s a solution to that question that brings me joy.
I’ve been the volunteer chair of the Grounds Committee at my son’s high school for the past 3-½ years.  He’ll be graduating in the spring and I will finish up my term with, if I don’t say so myself, a great system in place for caring for the campus landscape.
It turns out that teenagers can do just about everything.  The key was figuring out how to harness their abundant energy for the good of the grounds.

The Grounds Committee has developed a program called “Greening the Grounds” where classes, teams and clubs to adopt-a-spot on the grounds to care for.  It started when one brave teacher volunteered his class the first spring, then a few more the second year (with just a little arm twisting on the part of our staff liaison) and finally, now, groups are contacting us to request a spot and we have ownership of almost the entire grounds.  One key to our success is the signs. 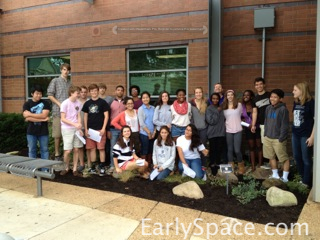 They are a great source of pride for the kids, AND keep them accountable to keep the spaces kept up.

Here are a few of the stories that warm my heart…

The baseball team planted a pollinator garden in school colors, by the big sign.  The Future Business Leaders weed the bed by the flagpole.  The Minority Achievement Club and the Community Service Club each have a an area to weed and mulch. 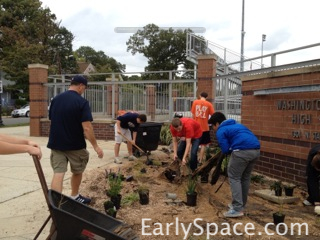 The intrepid IB Environmental club has worked on different areas for the past 3 years.  The first year they created a dry stream, planted it with native plants and this year won a county beautification award for the project.  The second year they installed, BY HAND, 500 square feet of pervious pavers to cover a muddy lawn eroded by foot traffic.  And this year they planted a student designed native garden at one of the other campus entries. 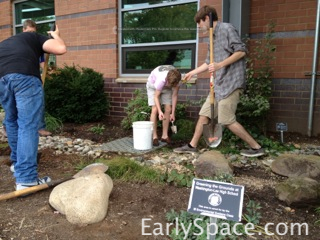 Half of the band weeded and mulched all of the beds along the loooong path they follow out of the building to march at football games.  The other half of the band practiced on a nearby field.  As they worked, the percussion section drummed along with the music using their trowels on the metal building columns.  (You can take the kid away from his drums, but you can’t take the drumming out of the kid J) 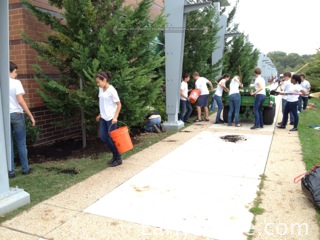 The Lumberjack Club… yes, there is a Lumberjack Club.  I asked my son, when they contacted the committee to volunteer, what the Lumberjack Club does.  He said, “I don’t know.  I think they wear flannel shirts and eat pancakes.”  Turns out they wanted to plant trees too, but until they found out about our Greening the Grounds Project, didn’t know how to go about it.  On the appointed day, a gang of about 10 kids arrived, ready to cut down invasive burning bush that had been planted when the school was built, and replace it with a hedge of native plants.  We discovered that most of the kids in the club had never planted anything before!  It was thrilling for them, and for us, to teach them the steps and watch them dig in. 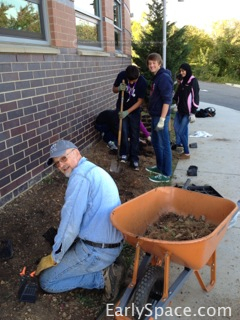 The Mountain Club got one of the most difficult spots on campus.  They had to clear invasive English Ivy that was strangling trees and crowding out good plants.  They started last spring, mentored by a Master Naturalist volunteer, Jerry (who they all love). Jerry showed them how to clip and pull the ivy, and how to use a weed wrench, which the kids declared the coolest tool ever.   They literally removed mountains of the stuff as well as spreading mountains of mulch to prevent erosion on the newly cleared ground.  (They are actually called the Mountain Club not because of this, but because in their free time they like to hike and climb mountains.).  Exhausted, after two 4-hour sessions this fall, I suggested that maybe we should split the area and bring in another group to do part of the work.  The response was “NO!  Then we’d have to share our sign!”  And from a girl who was sweaty and exhausted from pulling all that ivy—“I can’t walk past ivy anyplace now without wanting to rip it out.” 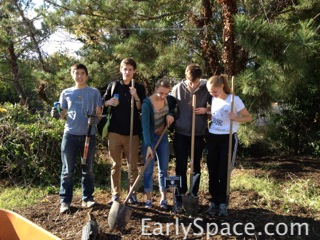 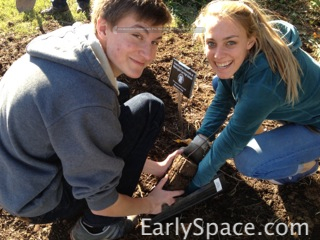 Getting kids outside, hands in the dirt, being active, learning how to care for the environment, taking responsibility for their school, feeling pride in their very visible accomplishments. What could be better?!