NC.  It was a huge and quite thrilling step forward in implementing the design I did for the school in 2010.

First, a little history.   Many of the projects I work on start with one person’s vision.

In Elizabeth City, that person was Linda Ward, Director of Federal Programs and Elementary Education for Elizabeth City-Pasquotank Public Schools.  Linda contacted me two years ago with her idea.  She wanted to  transform what was a relatively huge 1.5 acres of land available for the 7 classes of  preschoolers at Sheep-Harney School into something different from a traditional playground. 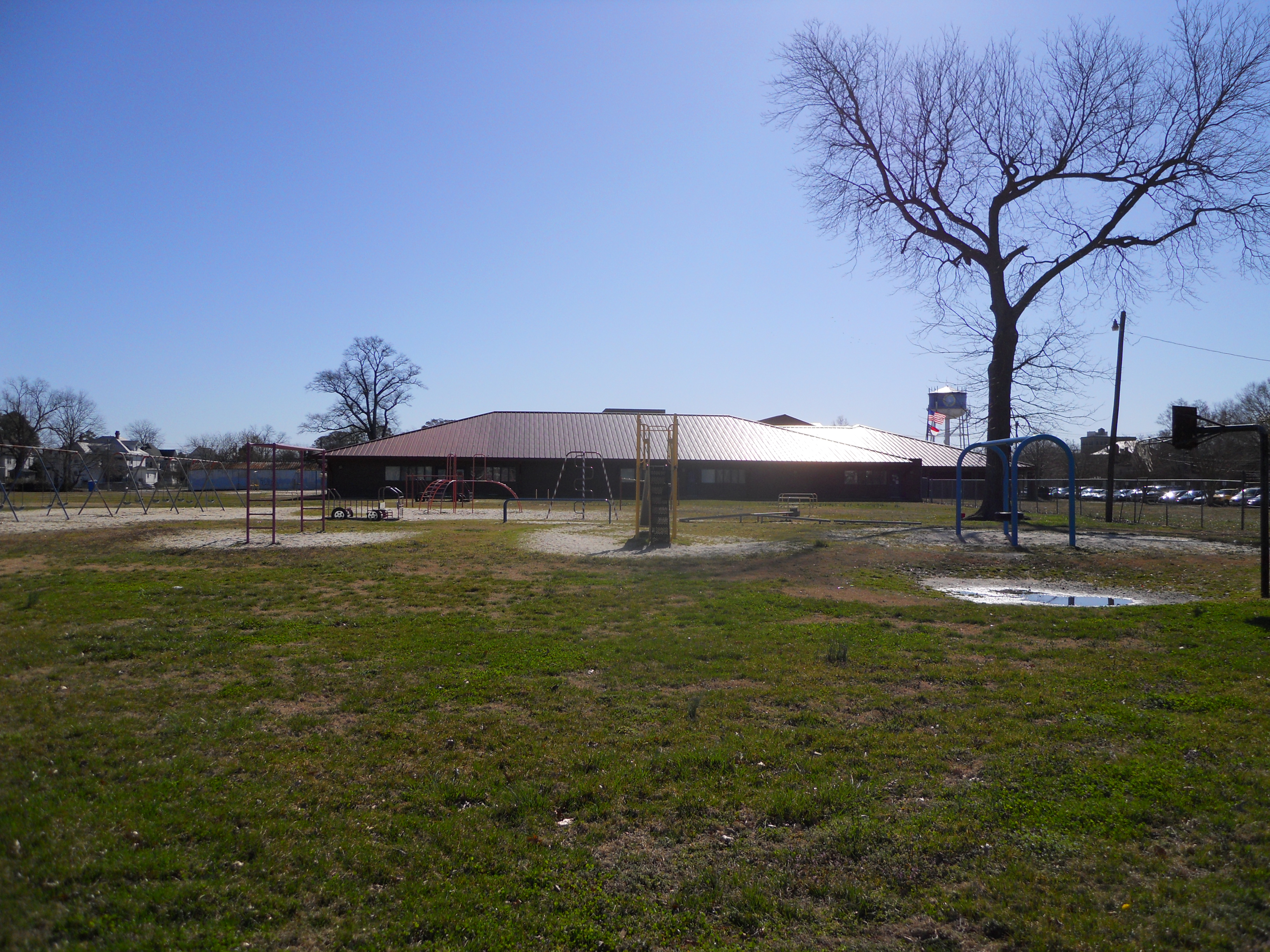 A before picture of the space…

She imagined a place where children who often had little access to nature, could play and learn in a rich, lush natural environment.   I visited the site several times, held a charette where  teachers, administrators and facilities people could learn about natural playspaces and what they look like.  Then I created a master plan that captured their vision.  The plan reflected the local terrain, with islands of play including natural climbing and outdoor furniture made of locally harvested cypress (from the nearby Great Dismal Swamp) a trike track and tunnel, a court for NC basketball, sand dune hills, driftwood playhouses, a giant sandy beach, a stream with a “pirate island” and edible gardens that would include some of the crops grown in this agricultural area, including potatoes and berries.  The plans also include a mud kitchen, a Pecan Tree stage (to be built around a massive pecan tree in the space),  a storytelling circle and a nature study area with Bald Cypress trees, bird feeders and a bird blind to offer up-close observation.

And of course, it included lots of plants!  I visited the Great Dismal Swamp, learned from rangers there about the local fauna and included many of those plants in the planning.

In 2011 the project  was  approved by the school board, in no small part due to Linda’s persistence in keeping the project alive after some delays.  Later that year the school system brought on local landscape architect Jesse Turner to do the construction documents required for local permitting and bidding.  Jesse’s dedication and attention to detail won the accolades of the NC Department of Education and the school system’s facilities department.  He got the project out to bid and oversaw the majority of the hardscape installation last fall. 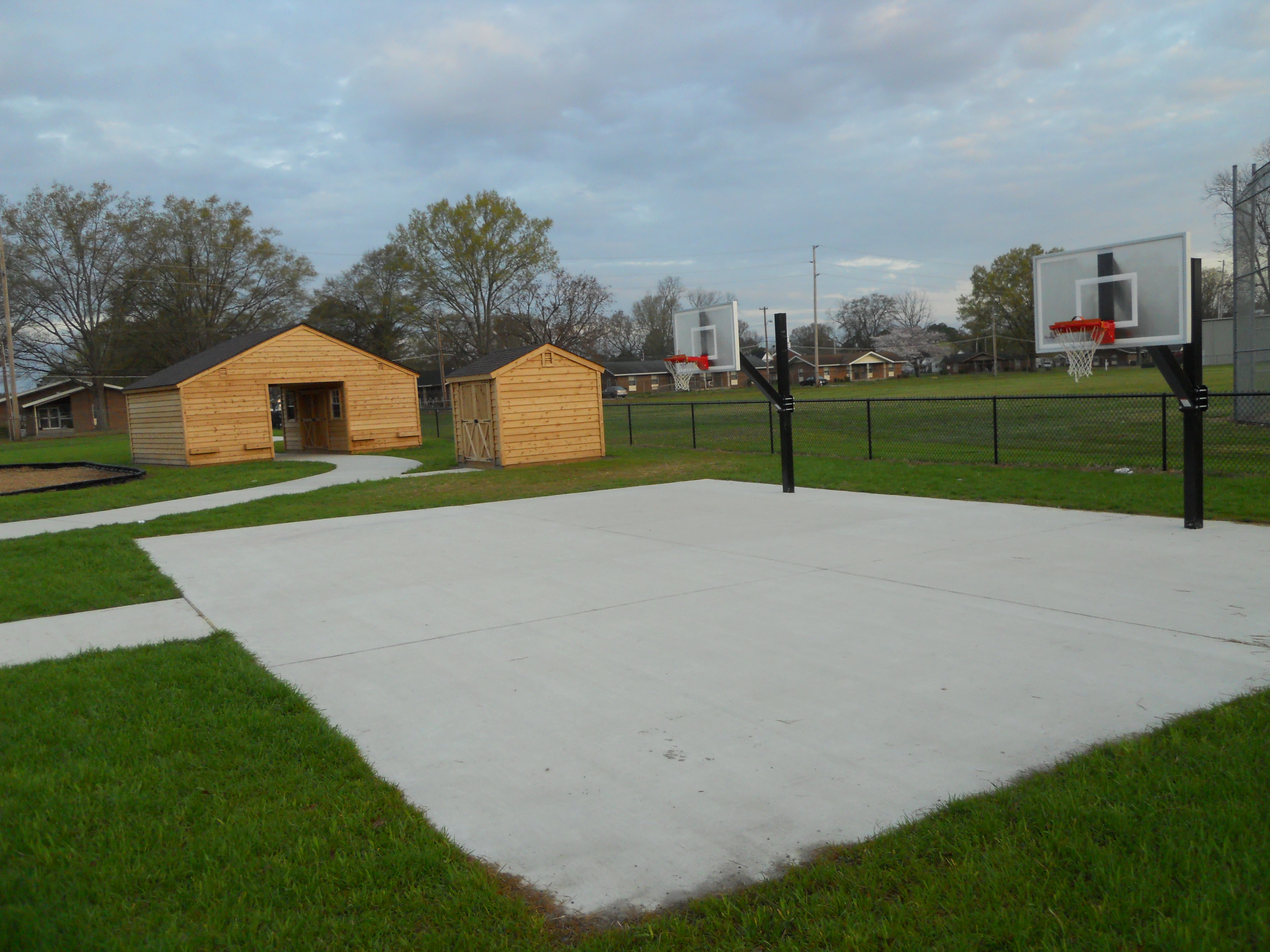 The shunnel (shed/tunnel) made of two shed kits from Lowes with a custom roof. Designed by Jesse Turner. 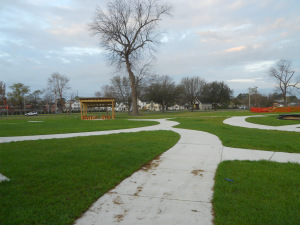 Accessible pathways with the Pecan tree, the nature hut and the hillside slide (behind construction fence) in the background. 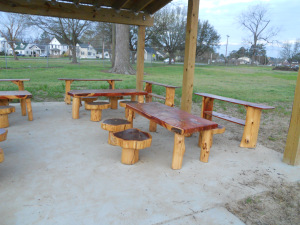 Inside the nature hut with furniture made by swamp logger Jeff Leitch.

Also last fall, Linda retired from the school system.  But she was so committed to this project and to the importance of providing something wonderful for the littlest children in her community, that she has continued, as  a volunteer, to raise funds, recruit helpers, and organize the forward motion of the project.  Yesterday was a day that she’d worked towards for months.

Linda invited the amazing Roberta Manzer’s award-winning Horticulture Class from Northeastern High School to come for the planting day.  Seventeen hard working teens, many of them members of Future Farmers of America,  came and spent  their full school day transforming the space.  They led 126 preschoolers, who came outside by classes for 1/2 hour shifts, and together big kids and little kids planted 75 mostly native trees and shrubs.  They dug holes (several times hitting buried concrete and other old construction debris) planted plants, and moved mountains of mulch. 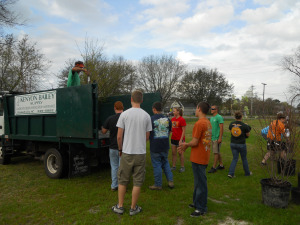 The high school students and the plants arrive! 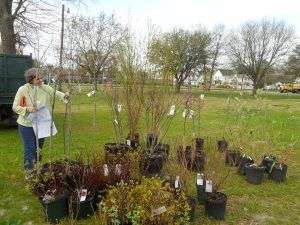 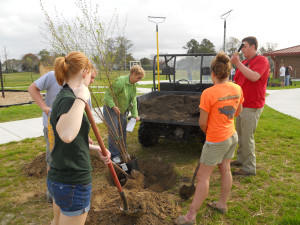 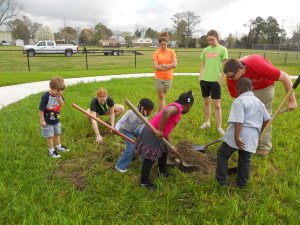 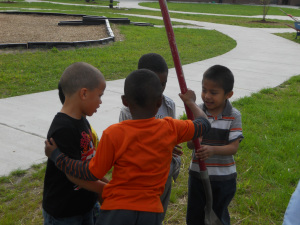 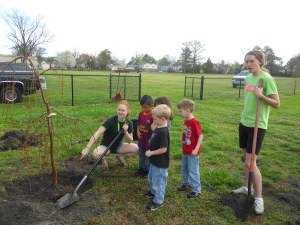 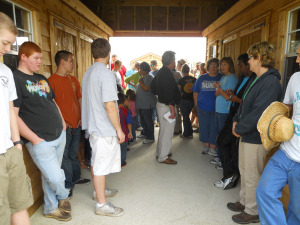 Escaping the rain and a chance to visit. 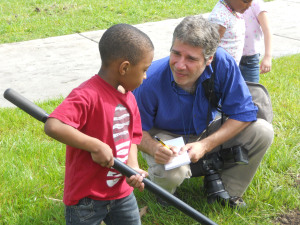 A worker being interviewed by reporter Peter Williams. 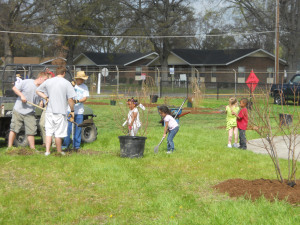 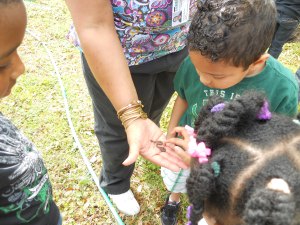 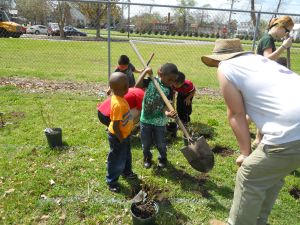 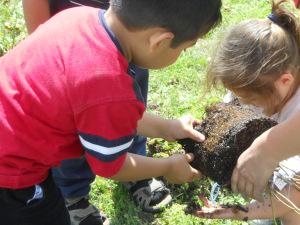 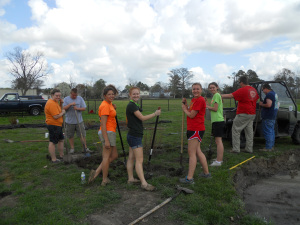 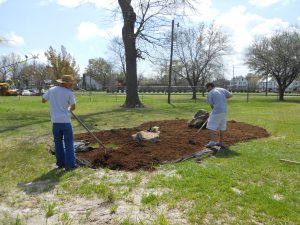 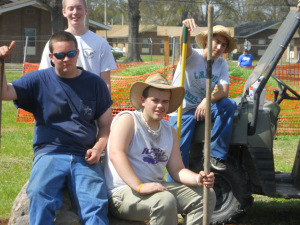 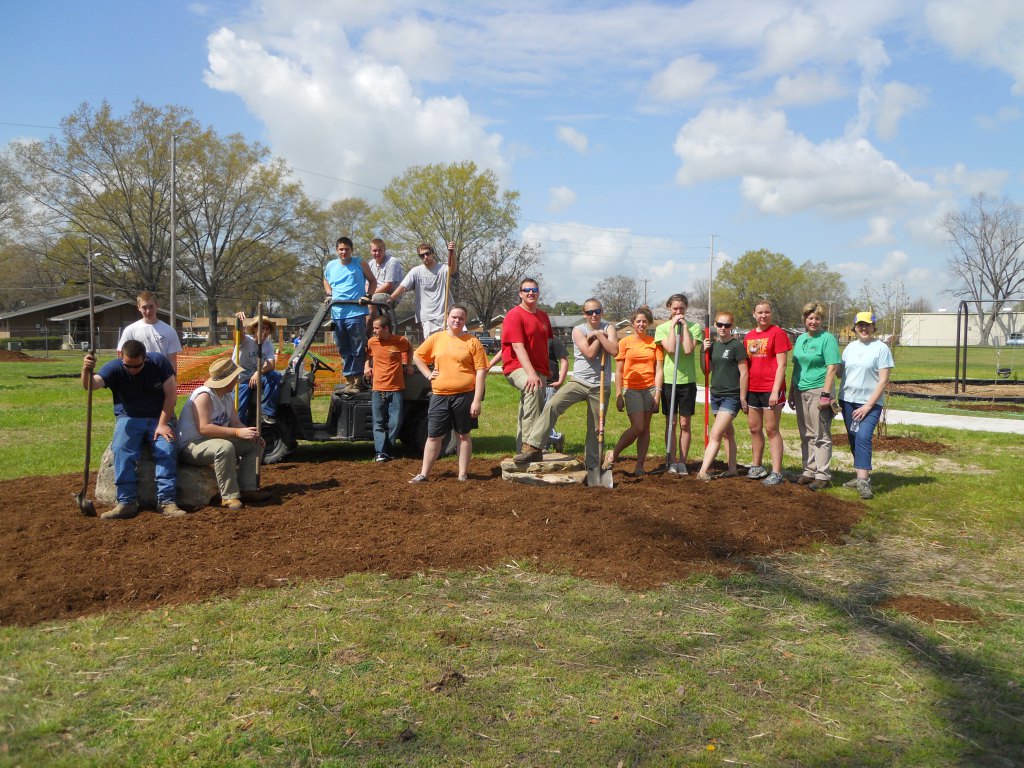 For me it was a  powerful experience and a huge honor to work with all those wonderful preschoolers, preschool teachers and administrators, facilities guys, high schoolers, and two awesome women– Roberta Manzer and Linda Ward.  It is incredibly rewarding to see a plan I’ve created go from paper to reality.

It isn’t done yet, but I think projects like this are wonderful when they are phased in and everyone gets to participate in the process– days like yesterday.  For now, the job is to have fun (and water the plants).